Two Weeks in Wales on a JFAO Exchange 2016

Meeting new people, competing in a variety of competitions, being involved in community betterment projects, and most of all, having fun! All of these are reasons I love being involved in the Junior Farmers Association of Ontario. Now, I can add travelling abroad to that list. I was chosen to travel to Wales for two weeks in July 2016 for an experience of a lifetime!

I embarked on this journey on July 10 and after a long series of planes, trains, and automobiles, I arrived in Carmarthen, Wales where I met the other six delegates on the exchange: 2 from Northern Ireland, 2 from Scotland and 2 from Finland. Even though we stayed in different host counties, I had the opportunity to get to know them during the orientation day and our four days together at the Royal Welsh Show. It was neat to learn about their lives, Young Farmer activities and culture of their homes.

Aside from the 4 days at the Royal Welsh Show, I stayed with 3 different host families in Ceredigion County, which is in central Wales on the west coast. This is one of the largest Young Farmers Clubs in Wales with 650 members aged 10-26 years old. The Young Farmers Club is quite similar to JFAO but they are a lot more focused on competitions and skills such as drama, tug of war, and rugby. While I was there, they were busy preparing for the competition finals to take place at the Royal Welsh Show. I attended a club BBQ to celebrate the end of the year and a Treasure Hunt.

I had a great time exploring the local towns and tourist attractions of Ceredigion County with different club members. These included the Welsh Pony and Cob museum, castles, the National Library of Wales, Dolaucothi Gold Mines, Devil’s Bridge, and Constitution Hill in Aberstwyth which has a breathtaking view of the coast stretching from south to north Wales. A huge surprise to me was seeing real dolphins on the sea! We also did some agricultural things including touring a local family farm supply store, a lot of dairy and sheep farms, and a farm which makes its own feed and has just installed a bio digester. A few highlights for me were attending a speed shearing competition, and helping on the farm with sheep dipping and herding sheep on the mountains with quads.

The Royal Welsh Show was a huge event showcasing Young Farmers Clubs of Wales as well as agriculture and skills from across the country. The best of the different breeds of poultry, cattle, sheep, horses and goats were on display as well as home craft, woodworking and talent shows. The final competitions of the Young Farmers Clubs were exciting to watch in every category from cooking and singing to blindfolded sheepdog trials and fence building. Other highlights of the show included watching a sheepdog herd a pack of ducks, monster trucks and trick riders on horses. The other exchangees and I camped alongside 2500 Young Farmers members at the Young People’s Village, which was an experience in itself with entertainment and excitement every evening.

The best part of the whole experience was staying with host families and becoming a member of the family. Because of this, I was able to experience the real Wales, and not just the tourist areas. I had the opportunity to learn about how people live and farm, their perspectives on current issues in agriculture, their culture and their Young Farmers club activities which are very important in their lives and communities.

Traveled Down to Kent-Essex County 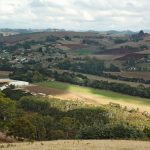