I just want to highlight how amazing of an experience it was to travel Germany on a JFAO exchange. In the beginning I never imagined just the experience I was in for, as I spent 32 days in Germany. I stayed in Neidersaxony, the North West Region, bordering the Netherlands, with major cities such as Osnabruck, Bremen, and Hanover. During my time I was able stay with 6 families within that area.

The first family I stayed with was the Meyer Family, who lived in Warrenholtz. I stayed there for 4 days and I had an amazing time. Some of the highlights were visiting the Volkswagen museum, factory in Wolfsburg and partying with the fire brigade youth group. I was also able to visit a few farmers in the area, as this host family did not live on a farm themselves. The farm tours included two dairy barns and a potato farm. One thing that stood out for me with these farms, is that all the farmers were in cooperation with each other, sharing equipment and man power in order to save costs.

One farmer also had an bio gas plant that was installed nearly a decade ago on his farm, and the other farmers contributed to a community owned one. Both are relatively new technologies and the cooperation’s surprised me. It was neat to see how these farmers have adapted to diversifying their businesses in order to save costs. There were great ideas to take away with me.

After my stay, here I hopped on a train to the city of Osnabruck where I stayed another four days with four university students that are studying agriculture. It would be the equivalent of living with University of Guelph students. Here I found some strange coincidences, two out of the four students had been to Huron County before. One of them had even worked in the town of Zurich in 2013, for a whole year on a dairy farm.
And in the student residence next door lived a former Junior Farmer Exchange delegate by the name of Carolyn Westerkamp, who had been to Ontario in 2014. It really makes the world feel small hearing theses stories. I spent my time here visiting a classmate’s home farm, that had a bio gas plant. They would collect rotten food from grocery stores in order to feed the plant. A specialty was rotten strawberries, as they have quick releasing sugars that dramatically reduce the methane maturation process. The university was also doing an experiment, where they were measuring the amount of nitrate seepage in the ground, through the use of fertilizers at this farm. It was also in Osnabruck, where I’d seen my first unpasteurized milk vending machine pipe, directly from the milk tank. Other farm tours included a state of the art beef farm and a class mate’s horse breeding farm. Here I was able to meet many people through going to parties, and other activities. 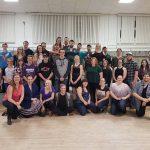 Do YOU want to Learn to Two Step? 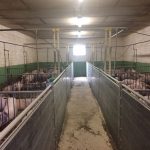