I can hardly believe that after almost a year of waiting the time for my travel is almost here. At last years’ march conference in Peterborough, I was awarded the opportunity of a life time with the JFAO travel exchange to Tasmania. In less than 3 weeks as I write this I will be embarking on one of the longest combined flights available to man currently. leaving from the dreary spring time in Ontario and landing almost 30 hrs. later in a different season, hemisphere and day in Tasmania.

I have been involved with JFAO at both the local and provincial level for 5 years now. Holding executive positions on both the local club levels and the provincial board and executive levels. As well as being a full-time farmer on our 175-acre family run mixed beef and sheep farm I am also a parts salesman at a local (case) agricultural dealership.

For my trip plans, most are still foggy but I do know that I land on April the 20th in Hobart Tasmania, from there after a brief settle in time I make my way to the largest agricultural show in Tasmania, agfest. which is run by the Tasmanian rural youth organization. From there the rest is all yet to be determined but I look forward to hopefully meeting a few past exchangees I have hosted from years past and learning how agriculture is practiced in another country and hemisphere.

Here’s to many new memories, experiences and new friends yet to be had. And trying to find a strategy to help combat the pain that will be surely be had of a tall guy flying on a plane. Stay tuned as I will be posting photos and stories of my trip as I go along. 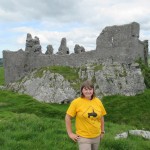