“I am incredibly honoured to have won this international exchange opportunity thanks to Junior Farmers,” said Brodhagen. “I will admit that at first, I didn’t think that I could take the time away from my family’s farm and work, but then I thought to myself this is a once in a lifetime opportunity that I will probably never get again.”

Brodhagen has been a JFAO member since she was 15 and will be retiring out of the organization this year. She farms with her parents on their multi-generational beef cattle farm near Brunner, Ont., works part time at Yantzi’ Feed and Seed and is a freelance farm writer. She holds a Bachelor of Political Science from the University of Guelph and is a graduate of the Cattlemen’s Young Leaders Program – a mentorship for those involved in the Canadian beef industry. Passionate about mentorship, Brodhagen helped launch a pilot mentorship program for women in agriculture through the Ag Women’s Network. A vocal advocate for farming and rural life, Brodhagen was appointed to be an Ag More Than Ever Ambassador for Ontario – an industry cause that encourages farmers to speak up and speak positively about the agricultural industry.

“I am excited to learn about agriculture and rural life in the United Kingdom,” she said. “I think it will be interesting to stay with a new host family every week as I tour Ireland, Scotland and England. I am perhaps most excited to learn about beef and sheep farming but to also attend some of the agricultural shows while I’m there including, The Royal Welsh Show in Wales and Balmoral Show in Northern Ireland.”

The exchange trip is organized by the National Federation of Young Farmers’ Clubs in the UK.

Those vying for an exchange had to participate in an interview, give a presentation, engage in an impromptu speech, and complete a quiz about JFAO and Canadian trivia to be awarded the trip.

Five other exchanges were awarded to JFAO members from across Ontario:

JFAO has long standing relationships with young farmer organizations around the world. Every year JFAO sends members abroad, but also welcomes international delegates to Ontario during the summer months.

About Junior Farmers’ Association of Ontario

The Junior Farmers’ Association of Ontario provides opportunities for young people age 15-29 of all backgrounds, but especially those in rural Ontario, to take on the challenge of exploring their individual talents and potential to develop personally while being involved in bettering their communities, networking, and having fun. JFAO’s mission is “To Build Future Rural Leaders Through Self-Help and Community Betterment.” 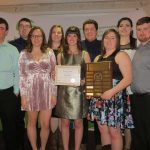 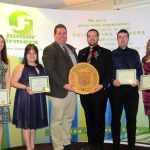