Republic of Ireland Exchange Part One

After being awarded the exchange trip to the Republic of Ireland at March Conference, August could not come fast enough. As the month of August started, I was packing my bags and I could barely contain my excitement for the 3 weeks ahead. Finally, August 3rd arrived and I was on my way to Dublin, Ireland. I was met at the airport by Tom O’Donoughue, VP of Munster and we set out for his home in the county of Waterford, in the South of Ireland. His family milked 90 cows and was uniquely located 1000 feet above sea level. My first weekend was spent at the International Miss Macra Festival. Friday night was the opening/welcome night, Saturday night was cabaret night with interviews of the participants, and Sunday was the wrap up for the weekend and the Gala Banquet where the announcement of the winner occurred.

My first full week I met up with a Scottish delegate and we would travel together for the next week. We left the Miss Macra festival and travelled by train to Mayo County. Stephen Prendergast met us at the train station and gave us a ride to his Glamping site. Glamping is a form of camping, but has many luxuries to it as well. Stephen spent 3 years building this site all on his own, and gained many ideas from his time spent in Canada. It featured hobbit huts and cabins to sleep in, hot tub, sauna, bathrooms, showers, outdoor kitchen area with a fireplace oven to cook with, kitchen, and movie theatre. It was an awesome experience to spend a couple days camping with Stephen, who was an incredibly accommodating and a great host. We then made our way to the Sligo horse races and met up with members from Cavan county, who would be our next hosts. We had a 2 very jam-packed days with Cavan, including many farm visits. We were toured around dairy, sheep, beef and laying hen farms.

We then had a full day of travelling to make our way to Kerry County.
Where we met our next host Trevor Coffey, and would travel along the Ring of Kerry. It was the most beautiful and incredible scenery I have ever seen in my life! We even went on a boat tour out to the Skellig Islands. It has become a very famous destination for tourists as the final scene from Star Wars: The Force Awakens was filmed there in 2015.
We finished our day by touring through the Gap of Dunloe, which was formed by glaciers and is located 1300 feet above sea level. Our week ended with us travelling to the Tullamore Show. This is one of the largest agricultural shows and is only one day. It consists of livestock and cultural competitions, commercial trade exhibits and farm skills competition. 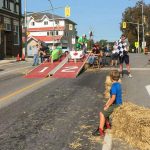 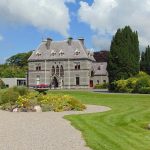