My next week lead me into something I hadn’t done yet, and that was spend more than 2 weeks in one county. I was getting the chance to jump that hurdle, as well as I started that week off by cooking a “Canadian”
meal for my host and a few other members. The meal I prepared, was a traditional French Canadian meal of torteire (meat pie) and garlic mashed potatoes for the main and Nanaimo bars for the dessert.

After the bit of cooking on the Sunday night, it was back to the exchange experience on Monday. With one of the member’s fathers taking us on a tour of the forestry and logging side of Tasmania. We toured from the actual logging and tree falling part to the saw mill and a plywood/veneer mill. It was very striking how similar if not the exact same logging is in this side of the world. The only difference I noted was the scale of practice. In Tasmania they log far less timber than we do in Canada.

The Tuesday was a day devoted to all things horse wise. We spent the day with one of the members who ran a riding school with her mother. There I got the full horse experience, from a riding session, to feeding to prepping for the farrier and cleaning/brushing/washing the horses. It was quite funny how similar yet different the schools of riding were from Canada to Tasmania.

The next three days were devoted to Hobart and its surrounding area. We got the opportunity so see and explore much more of the city and see some of the wonderful sites aboard the sightseeing bus. Sites we saw included the shot tower, the museum of Tasmania and several great walking trails. And to top it all off we had a chance to sit through the university revue, which was hilarious as it gave me a glimpse into Tasmanian politics and also what they thought of Donald Trump.

My final day in the south started off with a trip up to the lakes for a few hours of clay shooting, where not even the rain and snow could stop the shooting. Then we carried on down the road back to Quercus park where most of the Agfest crew were reunited for a thank you and celebration banquet.

The next morning I said my good byes to my hosts and the club members who had come along on the trip, and we made our way out into the countryside to my next host in the Midlands. Stay tuned for the next post. 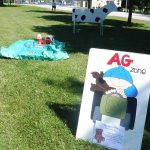 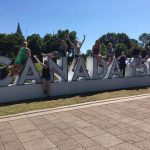