[/vc_column_text][/vc_column][/vc_row][vc_row][vc_column][vc_column_text]I was welcomed into Belgium December 6 2015 for Sinterklaas (Santa Clause) and his helper Zwarte Piet (Black Peter). Zwarte Piet climbed down the chimney and leaves the presents in and around the shoes for children. Sinterklaas has a book in which he kept all the names of the children and tells if they’ve been bad or good. Children are told that if they have been bad, Zwarte Piet will put you in his sack and take you back to Spain! Traditional foods that are left for Sinterklaas include tangerines, gingerbread, chocolate and ‘mokjes’ (cookies made in the shapes of letters).

Bastiaan picked me at the airport and gave a tour of the capital of Belgium, Brussels, including The Atomium:

We stopped to visit Stef, the past Belgium exchange. He came to Canada in November 2015 and we had a view of his dairy farm. Stef and Bastiaan discussed the differences in dairy farming between Belgium and Canada, including the current low milk prices in Belgium and for that reason the farmers are more knowable of the input costs for production. Belgium has different environmental law, like ammonia/odour affects on forests causing farms to relocate or can no longer expand.

Remy picked me up from Stef’s and off to Bruges, a very historical and pretty city to enjoy some Belgium beer. I got a cherry beer, the girly drink, yum! We ended the day meeting Siska and Irene. I got to sleep in Siaka’s beautiful bed and breakfast home.

Siska introduced me to pigs. They have more pigs in Belgium then people. For that reason and trade issues the prices of pigs have been negatively affected for several years. Siska explained the dike system in her area: there was a flood in WW1 preventing the Germans entering France. Siska also has potatoes stored in large barns and the tempter is regulated in 7 different sections, to prevent rotting.

Siska brought me to visit a friend’s who had chickens, potatoes, 3 robots in one dairy farm, and beets. The Belgium blue female calves sell $400 and male calves $40.

Maryse and Bert were my second hosts. Bert showed and explained how to breed pigs and Maryse showed the dairy farm. They were building another watering hole like a swimming pool. Each spring when completing field work they are still finding bombs from WW1. We went to check out a remodel of the trenches from WW1.

We then went to Bert’s twin brother Bart who happened to have bunker from WW1 used for the Generals, now uses the bunkers for the dry cows and bulls.

Susanna and a bunch of us carpooled to the European parliament.

The next day we took a train to Brussels for the Agribex, a large farm show. We went to “the big debate”, where the Groene Kring translated into English “The Green Circle” agricultural youth discussed current concerns and how to overcome then. Topics include; you can farm and have a social life, young people do not want quota because of increase costs. Etc

Marcel was very kind and picked me up from the Agribex and drove to the West part of Belgium, where the main language is German. While in Brussels most people speak French and over in Flanders, Dutch/Flemish are the core language. Children learn all four languages in Belgium which include English.

My 4th hosts were Elianna and Simona who live on an organic dairy farm,. They gave a tour of their area including a dairy farm where the main material used to construct the barn was wood. They where breeding red Holstein, a wider hardier animal. They had a tempter guild on the turkey curtain.

We got the opportunity to see the Belgium Blue, and wow. They are a doubled muscle cattle that can only be delivering by c-section. Lastly we saw a special Belgium breed of cattle dual purpose for meat and milk.

The next day we went to Germany for a tour of two farms. The first farm had 2 robots and a bio-digester. The focus was on breeding dual purpose cattle but unfortunately because of the decline milk prices they depended on the price of the Belgium blue and beef meat. The cattle where on pasture when weather allowed, helping to produce cheap milk.

The second was a high produce dairy herd they had an older barn that fit the purpose. They would only improve what they could afford on the farm e.g. a new roof, more head gates, improving dairy genetics etc.

In Week 2, I stayed with Bart and Elizabeth, Seed potato farmers.

After all of this, it was an early rise to the next visit with my next host. We traveled to Holland to help milk in a rotary parlour. We visited his brother’s and friends’ dairy farms and ended the evening with chocolates and drinks.

The next day we went to a green house where they place three types of salads together, rather than one type.

We met the president of Groene Kring whose family owns Witloof a common Belgium vegetable, that’s cooked with ham and cheese mmm… it is in high demand in the Christmas season.

Lastly I ended my stay in Belgium at Andy’s home, celebrating Christmas with festive bread, cheese and wine. 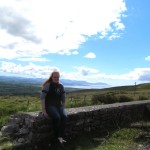 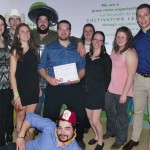