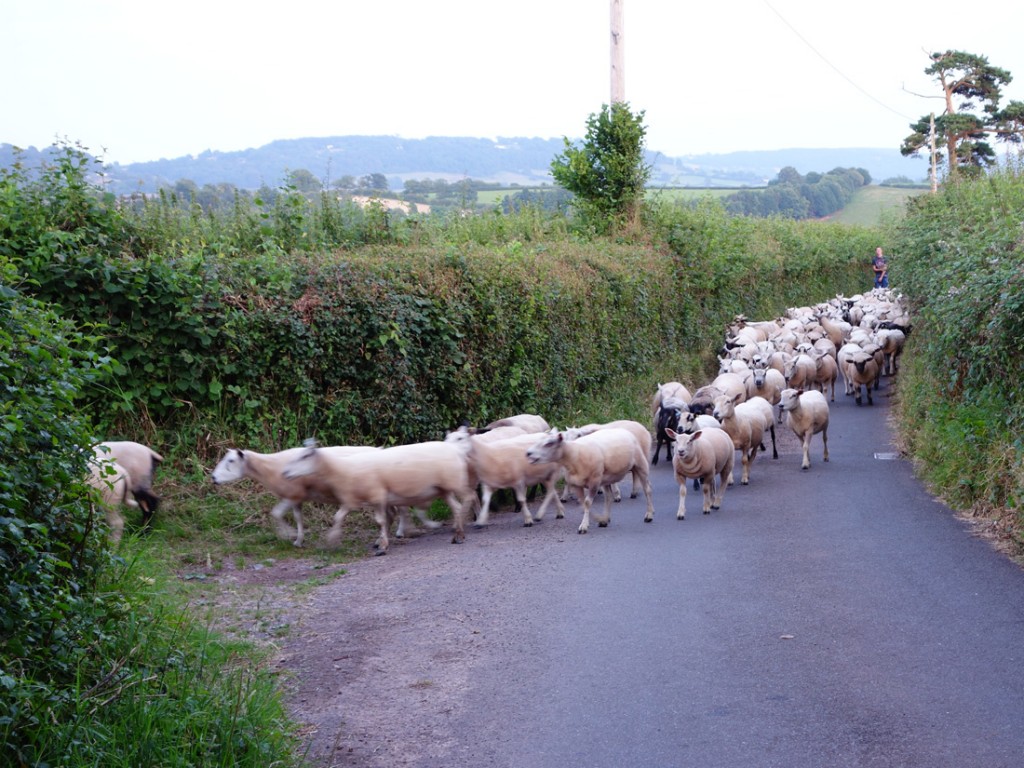 After returning from volunteering with Habitat for Humanity in New Zealand in February, I quickly decided that I wanted to apply for a JFAO exchange to explore and experience another part of the world! At March Conference I was awarded with what turns out to be the most memorable two weeks of a lifetime to Wales!

July quickly approached and I packed my bag without knowing what I would be up to in Wales except that I needed to have some wellies (rubber boots). Once arriving in Wales, after a 7hr plane ride (5hr time difference) and 6hrs on a train, it wasn’t hard to tell I wasn’t in Ontario anymore! Rolling hills, sheep and hedges!

My host county was Gwent County which the southeast part of Wales, with the majority of the county below sea level (thankfully a seawall was built many years ago!). Because of the high sea-level Gwent County has a vast network of interlinking ditches. Most fields have grips (low depressions) to then drain into the main drains. Since the sea-level is so high the ditches are slow moving and there is always water in the ditches. I was surprise that some fields rely on the ditches being full as a way to keep their stock in the fields.

During my first week I stayed with the Bedwas YFC (Young Farmers Club) and Usk YFC. I stayed on a dairy farm as well as a beef and sheep farm. While there I toured farms, museum and castles, It was hard to believe that hundreds of years ago that these castles were built and are still mostly in good standing. I also experienced Big Pit an old coal mine that has been turned into a museum (the toured guide even let me take a piece of coal home – I will be able to make a snowman this year!). When touring around the country side stopping at the blokes (guys) farm down the road I quickly notices how welcoming and interested they were to learn about Canada and Junior Farmers. While there I also had the opportunity to herd sheep one mile down the road! Which seems hard but with their hedge-lined roads (lanes) and gates into most properties it didn’t take long to herd the sheep down the road.

The highlight of the first week was being able to fly in a small two seat air plane! A Usk YFC member owns her own plane and offered to show me Wales from above. Let’s just say google maps does not do it justice. Being able to see the unique network of widening roads, the patchwork of fields, and the kilometers of hedges, it was unbelievable.

After the first week quickly went by I headed to the Royal Welsh Show (RWS), the largest agriculture show in Europe (which I heard everyone talking about during my first week). It seems to me that everyone from Wales went to the RWS and stayed in their caravans (trailers) for the four day show. There was sheep shearing, cattle showing, sheep showing, pole climbing, log cutting, and many entertainment shows. And for all the shoppers, there is a whole market section.

While at the show I stayed with all the other exchangees at the Young Peoples Village (YPV), ran by YFC in our home away from home, tents. All I can say about the YPV is that it is something you need to experience first-hand. The majority of the time all of us exchangees stuck together at the RWS. As we were all international visitors we had the privilege of signing in at the International Pavilion. International visitors received an International Badge and could uses the reception lounge and gain free access into the main ring grandstands! During the last day of the show myself and one of the other exchangees were interview by BBC! I never did see it on the TV but I assure you I represented you well.

During the RWS the YFC had their final competitions (county vs county). It was amazing to see tug-of-war, rugby, singing, and dancing competitions. A lot of effort was put forward by the YFC.

For the remainder of the exchange I stayed with the Wendwood YFC. After a day of recovery from the RWS I explored and a few more castles, roman buildings, and an abbey.

Before I knew it my two weeks was up and not once did it rain. I had such a great time in Wales I wish I could have stayed longer!

Thank you JFAO giving me this opportunity, Gwent County YFC for hosting me, and Mike Sproxton (2014 CIP) and Trisha Staples (2013 CIP) for coordinating the exchange. I encourage all Junior Farmer members to apply for an exchange, you will not regret it!