Ireland is a country that should be on everyone’s list of places they want to see. My stay in this beautiful green country of rolling hills and some of the friendliest people I have ever met was a highlight of my JF years.

Landing in Dublin, I was met by William and Mary O Donoghue who with their son Tom were my first hosts in Waterford. Milking 90 cows 900 feet above sea level it was my first taste of how different from home farming was. My first night in Ireland I helped Tom with the milking then it was off to the pub for a few games of rings at the local pub. Between helping out on my host’s farm my hosts kindly toured me around the area. We visited the Melleray Grotto where a vision of the Lady Mary appeared in the 1980s which is near Mount Mellaray itself an abbey founded 1833. Then it was down to Thurliss, in Tipperary, for the Miss Macra Competition. After a fun filled weekend, I headed on to stay with Mark Hayes and his family on their farm overlooking Dungarvin Bay. The Hayes family raises calves from young to weaning weight all on grass which was really interesting. Seeing the local sights like the Greenway an old railroad turned into a bike path, the Mallorytown Caves, the Magic Road in the Comeragh Mountains on our way up to see the Mahon Falls filled the week while once again helping where I could on my host’s farm. It was on to the Leddinghams for the last few days in Waterford. Waah (Edmund) and his family milk 80 cows and finish the calves. I was kept busy spreading slurry, pinching calves and eating ice cream while enjoying my host’s hospitality. From there it was on to the city of Waterford itself for a tour of Waterford crystal where I got to hold a glass gun worth more than my truck (before depreciation). Sunday was spent at the Tullamore show which was nothing like a show back home; a real mix of machinery and livestock. I did my best to get as much free stuff as possible. From there, Diarmud Murray took us up to Roscommon.

Milking 180 and running a custom harvest operation with his family he kept us busy building stone walls and baling hay. It was in Roscommon that I first saw the Embrace tractor. Donated by a local dealership it was raising awareness about farm safety and fatalities. I caught a bit of the sheep auction before hopping on the train for Mayo. While in Mayo, I stayed with Steven Penderghast who built and runs Mayo Glamping. With three hobbit huts, three Aframes, a great outdoor pizza oven and a real throne it was amazing. The touristy highlights included the Museum of Irish life, Foxford Mill, The Connacht Distillery where they brew their own version of whiskey poitin (it was quite good but of a different bouquet on ones palate as compared to the real stuff of course). From Mayo it was down to Club Officers Training. It was really good and as someone who has sat on the provincial board I found the discussions interesting and not that much different from the issues we face here in Junior Farmers – and for those who served with me on the board I stayed awake the whole time! From there it was back to Waterford, with a stop in to catch the All-Ireland Hurley Final where I watched Limerick beat Galway to take the cup for the first time in 45 years – wee bit of excitement in the pub that day. From there I went up to Leish with Helen Demspey whose family not only raises bull beef but farms right across the road from the Dempsey family castle. From Leish we were too Wexford with Mark Daynes whose family has a tillage or cash crop operation as we call it. Took us down into Dublin for the day where we toured the Guinness Brewery and the Dublinia Exhibit before heading back home. Then it was bye-bye Ireland and home for me. It was a whirlwind three weeks that I won’t ever forget and left me wishing I had just a bit more time. As I told more than one host I’ll be back one day! 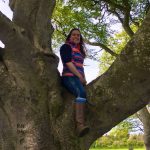