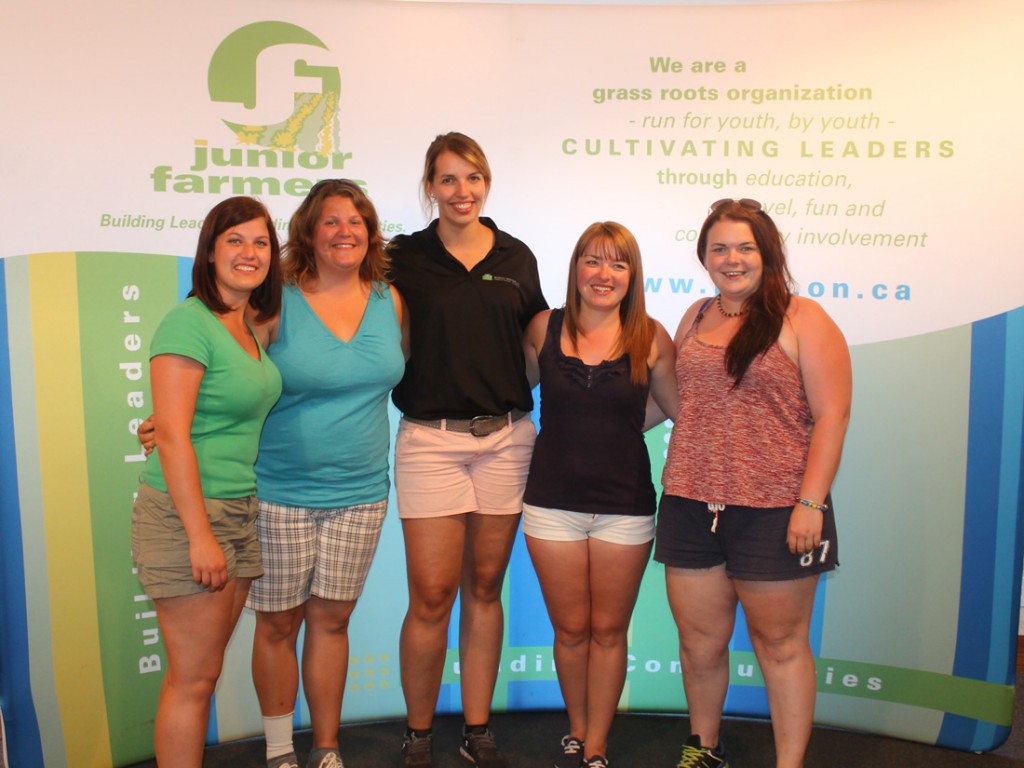 The delegates spent their first two weeks in zone 7 with Perth County, touring Perth, Bruce and Huron County. The two week delegate adventure in Perth began with Perth members having dinner with Middlesex JF and ended with being glittered in Hanover as we switched over the delegates with Rocklyn JF. The original switch over was a dinner out in London and a night out on the town with our two clubs. Perth tried to provide home cooks meals at various club members’ homes, to show our hospitality and involve all our members rather than just our hosts, in hosting the 2015 delegates.

Week one was a busy week for the girls. Gillian started the week off being a good sport and helped coach Perth’s team to first place in the Redneck Olympics at the Listowel Fair Derby. The week consisted of BBQs, the Listowel Fair demo derby, tours of Stratford (including the festival warehouse), a tour of St. Mary’s, kayaking, a tour of a wild boar farm, a tour of a milking water buffalo farm, shopping, the show “Seeds” at the Blyth Theatre, campfires, and a Drive In movie at the Shipka Drive In. The girl’s major highlight from this week was the milking water buffalo farm as it was a unique operation they had never seen before.

Week two was a more relaxed week to allow the girls to catch up on some much needed sleep, but that doesn’t mean they missed out on any activities. This week consisted of a car rally around Listowel, farm tours, a tour of Pioneer Seeds in Wingham, a tour of Bruce Power, they helped celebrate the President’s Grandma’s 70th Birthday, and Hoity Toity Wine Cellars, as well as a couple days at the Beach, rides in tractors, swimming, a visit to Anna Mae’s (a place that the TV show “You must eat here” filmed an episode), driving a 9630R John Deere, and finished with a trip to the Embro Tractor Pull. The girl’s major highlight from this week was a tie between driving the 9630R and riding in the packer at the Embro Tractor Pull.

All in all the two weeks flew by quickly. Many friendships were made, many laughs were had, and lot’s of information was shared between delegates and members of Perth JF. Perth can’t wait to see the delegates again before they leave Canada at the Ambassador’s Banquet hosted by Perth JF at the end of August.

The last week was spent with Rocklyn JF. This was the first time all the girls were able to stay all together under one roof! The girls went on various day trips including a waterfall and lookout. They said it was also the first week where they really got to get their hands dirty and do some chores! They helped Hilary milk, feed calves and fencing.

Their highlights this week were building a fence with Hilary. They were really proud of their accomplishments!

They ended the week with the JFAO charity golf tournament and the Exeter Rodeo before heading off to zone 4! Even though none of the girls had ever golfed before, they had a great time. They met new people including some of our JFAO partners and had a lot of laughs!

The delegates overall highlights of the three weeks included the water buffalo farm, seeds play, the Embro Tractor pull, going to the beach, the Rodeo, and fencing and feeding calves with Hiliary.