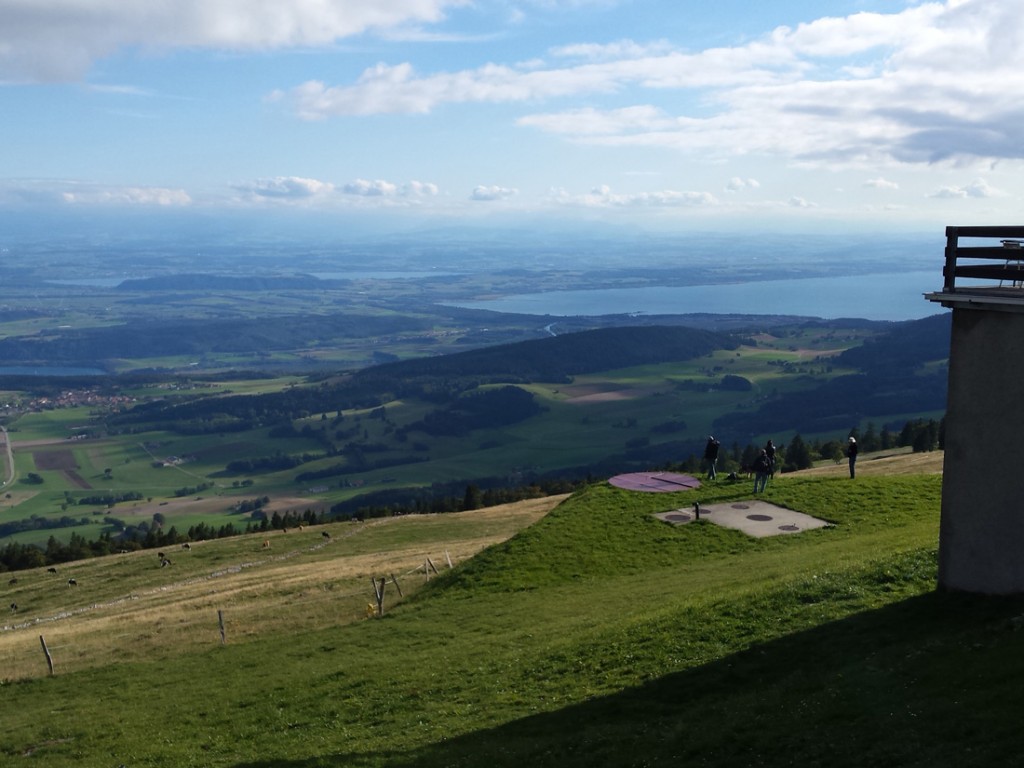 The past 2 weeks with the Boss family in Bargen have been the perfect end to this crazy adventure. My host family consists of my parents Christoph and Karin and my younger siblings Jason (19) and Kimy (16). Christoph works for a logistics company, Karin owns a butchery that is run out of the house, Jason is a truck driver, and Kimy is working at a grocery store and finishing school.

Since the Boss family owns a butchery, the past 2 weeks have been an interesting adventure of trying new meats! I have eaten lamb, duck and rabbit! I think rabbit might actually be my favourite.

My time here began with a BBQ between my two exchanging host families, then in the evening Jason took my to the Chasseral Mountain nearby to catch the sunset since it had been such a beautiful day. But, apparently what is a beautiful day at 400 meters isn’t always a nice day at 1600 meters! We got to the top of the mountain and we were consumed by fog! So we walked around a bit and froze! Then, suddenly, the “fog” cleared! It turns out we were in a cloud! Once the cloud cleared it was still cold but we had a beautiful night view of the area.

On Monday Karin took me to Bern for an Alp homecoming festival! In front of the parliament building there was a market so we checked that out. At the market we ran into my coordinator, Christian, and a friend, Maja, which I made on the hiking weekend. After lunch we waited by the main road for the cows to come. Seeing the cows coming through the city was very special, how often do you get to see cows stop traffic in the big city? Once a year for this festival! The cows were all clean up and dressed in their bells and flowers, the ladies were wearing traditional dresses, and the men were all dressed up too in their traditional Swiss jackets! The event was pretty amazing.

The Boss family loves hockey and so they took me to see their local team, Biel, play Tuesday and Saturday night. Biel is one of the hockey teams in the Swiss professional league, so it was really good hockey! There was even a Canadian on the team! The fans at the hockey game were crazy; they had flags and were always singing and cheering! Biel won both games that I went to.

Wednesday the Boss family had to work so they bought me a day pass for the trains so I could go to Zermatt, Montreux, and Lausanne. Zermatt is a beautiful little town at the base of the Matterhorn (one of the most famous Swiss mountains). In Zermatt there are no cars! The old town of Zermatt is my favourite, it is full of true Swiss houses! Normally from Zermatt you have a beautiful view of the Matterhorn, unfortunately it was a little rainy when I was there so the mountain was blocked by the clouds. In Zermatt there is a Matterhorn Museum that is free so I checked it out. It outlines major events and the history of the mountain. Here I learn of the first tragic expedition up the mountain, seven men made it to the peak of the Matterhorn but only three made it home. My next stop of the day was to Lausanne for the Olympic Museum! The Olympic Museum is a one of a kind museum, it houses many artifacts from the Olympic games and it tells the story of how the Olympics all began. It was a really cool museum. Lausanne is a beautiful little city of the Lake of Geneva, and the view is magnificent. Next, I went back to Montreux so see the famous Chillon Castle. By now it was evening and dark out so the castle was closed but it was really neat to see it lit up at night as well as seeing the lights of the towns on the lake.

Friday Karin took me to see a real alp homecoming in Sumizwald. It was amazing! There were seven alps that came home, so about every 15 minutes a new group came by. Some groups had been walking for over 5 hours by the time they got to the town!

Bargen is in a really neat location: it is just at the edge of the German speaking part of Switzerland before it becomes French speaking. It is also where most of the vegetables are grown in Switzerland! So, there is great variety in the fields. Bargen is also next to many small towns with vineyards! On Saturday Christoph and I went to Ligerz for a wine festival! It felt like we had left Switzerland! Vineyards surround the town and the festival was in one of the small alleyways filled with people and wine! At the festival Christoph and I enjoyed a nice glass of Swiss wine.

On Monday Karin, Evelyn (the neighbour) and I went to Cailler, the chocolate factory, for a tour. The Swiss are responsible for discovering the way we enjoy chocolate today! Originally chocolate was consumed as a drink that was brought to earth by the gods. Chocolate has a very interesting history!

On Tuesday I got to hang out with Beatrice, who was in Canada all summer on a JFAO exchange! She picked me up in the morning and showed me her farm. We had lunch with her parents then she showed me where she will be attending school in January. We had a lot of fun catching up and talking about our exchanges!

On Thursday I went out with Jason in the truck, we made deliveries and pick up in the Bernese Oberland. We had a lot of fun hanging out and dancing in the truck, except for when he sprayed me in the face with the air hose!

Friday was my birthday! So I took advantage of the opportunity to sleep in 🙂 And in the afternoon Kimy and I went to met my friend Andrea and her kids for birthday celebrations. In the evening the family took me out for supper. The restaurant we went to specializes in Cordon Blue, so that is what I had. It was delicious. It turns out that the owner’s brother’s girlfriend is from Ontario but he couldn’t remember where so he called her and handed me the phone! It was really funny. It turns out she is from Monkton so that was pretty cool. After supper we came home and had cake with 25 candles on it!

Saturday morning we did some shopping for last minute things I needed before leaving Switzerland and Christoph took me to the market in Biel where Karen was selling meat. Saturday evening was low-key, then we went to a pub for dinner. It turns out the pub was actually a surprise party for me! It was awesome and the perfect end to 3 months in Switzerland! Many people that I have met over the past 3 months came out, plus 2 of the IFYE’s from the USA, and some of the IFYE’s who have recently returned home from their exchange (including Beatrice)! It was amazing to see many of my friends again and to meet more IFYE’s. There could not have been a better way to celebrate my birthday and the end of my exchange in Switzerland! Special thanks to Andrea, Matthias and the Boss family for making this happen!

To end my time with the Boss family Christoph and I went to Creux du van (the Swiss Grand Canyon). It was absolutely beautiful! The best part about it is that I have never seen a canyon and it’s a totally different view than a mountain!

Monday morning I said goodbye to the Boss family at the train station and boarded a train (with way too much luggage!) to Geneva. I spent the day wandering around Geneva. I saw the flower clock, the jet fountain (but it wasn’t running because it was too windy), the United Nations, the broken chair and the Canadian Embassy. Then I hang out in the train station finishing my blog post before I get on a bus to Paris!

Switzerland has been amazing. I cannot believe that 3 months is over. I have met so many kind and amazing people, seen so many beautiful things, and tried many new things! I look forward to coming back one day to see my friends again and I look forward to my friends coming to Canada to visit me! Thank you IFYE Swiss and JFAO for giving me this opportunity you have changed my life and given me a summer that I will never forget!

Stay turned for a recap and reflections blog post next as well as blog posts about my adventures through Europe!

Courtney Steven is a Perth Junior Farmer on exchange in Switzerland. For more information about exchanges or to apply for one, email the Director of Community and International Programs at cip@jfao.on.ca.