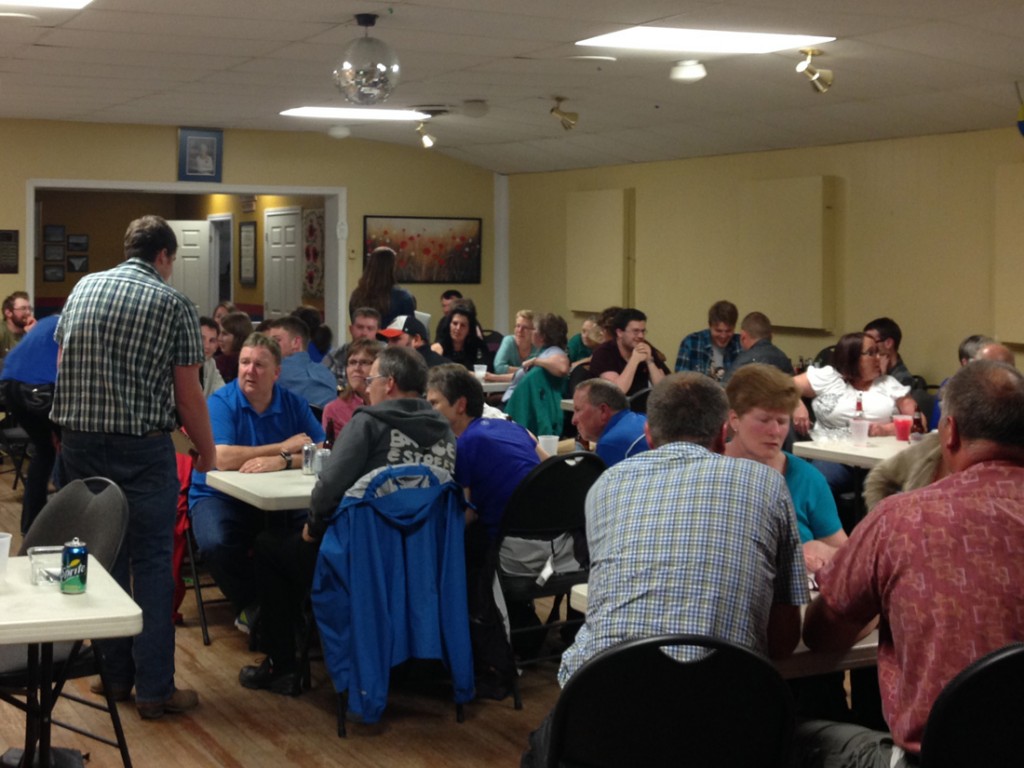 The theme of the JFAO Leadership Camp last weekend was “Overcoming Adversity”, and oh boy, did we ever overcome adversity to host a fantastic trivia night at the Osgoode Legion on June 12th.

Kristy-Anne Wytenburg and I have been excitedly planning this trivia night for months. We dreamt up the idea in March, passed a budget in April, and have been putting in countless hours creating our own questions, meet with the hall, putting up posters, and doing all the prep work. We were both very excited to co-host the evening… until adversity first struck. Kristy-Anne found out in early May that she was going to have an exam in St. Catharines the same night as trivia night in Ottawa. That was a significant blow to the evening, but we didn’t let that stop us. Kristy-Anne continued to help from southern Ontario and made the best of the situation she was stuck in – the evening would not have been a success without the invaluable work put in by Kristy-Anne.

But no amount of prep work can prepare for uncooperative technology, and adversity struck three times in the hour before the event started. The projector for the evening was generously donated by Brian Hamilton of Renfrew, and was integral to the evening’s success. There was a powerpoint created with all the questions on it, as well as two categories of picture identification questions. A working projector would be very helpful in a trivia night like this. Unfortunately the projector worked, and the three computers we had on site worked, but none of the cables we had were able to connect our laptops to the projector. Darn technology these days, it’s getting too advanced for its own good! The same happened when we went to set up the microphone… The bingo caller had hidden his special mic somewhere in the hall, so luckily a member of the 4-H square dancing club had a mic in the truck. As per our luck, it didn’t work when we plugged it into the system. This was around the same time we figured out the music speakers had no volume knob on them and were far too quiet. By this time there were ten minutes until show time, so we had to keep trucking on.

When we faced adversity, we pushed right through it and wouldn’t let anything ruin the night! Our solutions were creative, funny, and exactly what you’d expect from the Junior Farmers. In lieu of a mic and projector, I stood at the front of the room and used my ‘teacher voice’ to project the questions around the room. When it came to the picture categories, my helpful volunteers Hanna Mollema and Phil Sullivan patrolled the aisles, carrying the laptops we hoped to plug into the projector, showing contestants what picture they were to identify. The song ID category worked surprisingly well without speakers – I brought my phone around to each table and played a short snippet of each song, and as long as the rest of the crowd stayed relatively quiet and respectful, everyone got their chance to hear the song. It might’ve been a little rough around the edges, but we got er done and made it work!

Now there’s lots of trivia nights out there, so we had to make sure our Carleton JF trivia night stood out from the crowd. This was not just a night of straight trivia – in addition to 9 categories of trivia, there were 5 intermission games for bonus points. The first game was flip cup (with water), which caught a few of the older teams off guard but was thoroughly enjoyed by all. Interestingly enough, there were no ‘one-flip-wonders’, so it became an intense relay that came down to the final two flippers. Next up was impromptu speaking – participants were given a random noun such as ‘hockey’, ‘the fair’, ‘Canada’, and ‘trivia night’ and were asked to speak about that topic for 45 seconds. Some of the speeches were so impressively funny I couldn’t cut them off at 45 seconds and they continued on for over a minute! Dry apple bobbing was very entertaining to watch. 10 apples were suspended by string from a long wooden pole that was held horizontally, and participants had to pull the apple off the string with their mouth. This was the only event that everyone left with a prize – they got to eat the apple! Family Feud had two teams of participants trying to figure out survey answers to “name a fruit you never buy just one of” and “name an animal we eat but would never eat us”. Balloon stomp became the most intense intermission game of the evening. Participants had balloons on strings tied to one ankle, and must ‘stomp or be stomped’ – get stomped on, and your balloon pops, you’re out. Last one with a balloon intact wins! Carleton JF member Lindsay Ruiter won the competition in an epic 1v1 overtime that lasted over a minute, duelling a gentleman from Osgoode in a stomping match that saw a few close calls on stomps, a few slips, and one almost-fall into a table. Things got heated! Many thanks go out to Hanna Mollema who stepped up when Kristy-Anne had to stay at school and helped to organize and run these fun games.

As for the trivia, participants were treated to a wide variety of categories. Agricultural categories like “Animals on the Farm”, “Know your Breed (featuring pictures)”, “Famous Agvocates”, and “Farm Tour (featuring pictures!)” stumped our non-JF friends who came out, but were wholly enjoyed by the farming crowd there. As a bonus, the non-farming folks were doubly excited when they got one of these questions right! They much preferred categories like “It’s Show Time! (movies and TV)”, “Game On! (sports)”, “Music to my Ears (music trivia and song ID)”, “Around the World”, and “Around the County”.

Last but not least, I’ve got to thank our very generous sponsors for providing us with prizes! Clarmell Farms, the farm of Carleton JF President Ben Mussell and family, donated six bars of goat’s milk soap and six CD’s of his dad Paul Mussell’s standup comedy. Sevita International was fantastic to donate six hats, and that donation was matched by six hats from Cub Cadet. Thank you very much to all of our sponsors and everyone that came out to enjoy a great night of Junior Farmer trivia!

Alex Mitchell  is a Carleton Junior Farmer. Follow him at @AlexMitch08 and the club at @Carleton_JF.