One Month in Scotland – Victoria Kyle 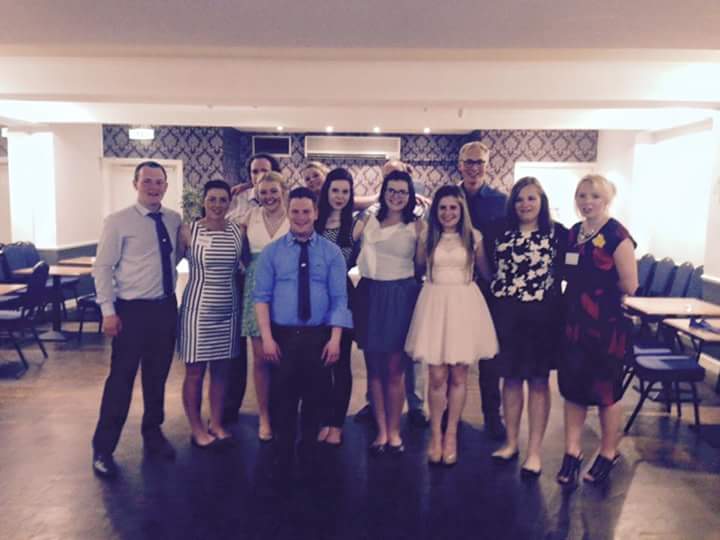 Scotland—where do I begin?! I can’t believe a month of my exchange has already passed. I have done some amazing things and met so many great people. I am sad to be leaving Scotland but also excited to start a new adventure in Northern Ireland!

I arrived in Edinburgh airport on Monday June 8 and headed to a restaurant in town to meet the other 12 exchangees! There were 8 in total from the UK & Ireland, and the others were from Finland, Norway, Switzerland, New Zealand and of course Canada. We spent our first two nights of our exchange in a hostel in Edinburgh, seeing the local sights. On the Tuesday evening we were invited to a dinner reception with a ceilidh to follow (a type of traditional Scottish dancing). It was so much fun!

On Wednesday we all hopped in a van and made our way down to Ayrshire district, where we got to meet our host clubs. Luna from Ireland and I stayed with the Beith Young Farmers club- Jacqueline Crawford and Emma Stevenson were my hosts. Thursday we met up with the rest of the exchanges and took a ferry to Millport and rented bikes and biked around the island. We had a day of farm tours the next day- two dairy and one free-range laying hen operation. I also participated in my first car treasure hunt which was quite fun! Of course the week wouldn’t be complete without some shopping, so on Saturday Emma took us to two different shopping centres! That night was a barbeque at Jacqueline’s to meet the rest of the club. Sunday was spent with Ayrshire district on a day of stock-judging- it was quite busy, visiting two different farms and being on the road for 15 hours! The next couple days were a bit more low key- a day on the farm and an art workshop. Ayrshire district was a great place to spend my first week!

From June 18-21 all the exchangees spent time in Edinburgh at the Royal Highland Show. I had never been to anything like it! These four days were packed with events to watch, things to see and people to meet. I was fortunate enough to be able to meet some past exchangees that knew my mom as well! I especially enjoyed watching sheep shearing, cattle and sheep shows and tug of war. I was also able to meet up with fellow JFer Courtney Steven and explore the show with her. One of the highlights for me was the grand parade, exhibiting all of the winning livestock from the week.

After the show was over we said farewell to the 8 delegates who’s exchange was only two weeks, and the rest of us international exchangees headed on to Clyde and Central District. I stayed the first part of the week with the Black family from Callandar YFC. We toured Stirling castle and a couple farms, and I got to try three-legged football. I spent a day with the other exchangees at the local Safari Park which was quite exciting. We also got to take part in a tug of war practice. The last day spent with the Callandar club we toured a local butcher shop where one of the members works, and a local distillery. We also toured Harbro Feed Mill. The second part of my week was spent with the Woods who are a part of Loch Lomond YFC. We went for lunch and a walk with an amazing view at Loch Katrine and got to play at Airspace (an indoor trampoline gym). One of the days was spent in a loch (it was freezing, we had to put wet suits on) playing on huge inflatable objects such as teeter-totters and slides. We also spent a day in Glasgow and got to go to a ceilidh!

The next leg of the journey had to be reached by plane- Phil (Switzerland), Katie (America) and I flew from Edinburgh to Kirkwall, a town on the island of Orkney. Our hosts for the week were Briony and Steven, who also had a little girl named Leah. Because the island is fairly small, each of the three clubs there took us for a couple days. The first two days were spent with Harray YFC, where on the first day we went for a tour of the local Mart (market), a hike in the woods and to the local fire station for a tour. The second day we went for a tour of a distillery, a local business that sells everything from groceries to seed grass, went for a walk in Kirkwall, and to a local farm museum. The next two days were spent with East Mainland YFC. Joanna took us around town, to Orkney Wine Company, and to the Tomb of the Eagles. The second day Joanna and her friends took us to the island of Hoy, where we had a great hike up to the Old Man of Hoy, a big sea stack. It was beautiful, and I even got to see puffins! Friday was spent with Sanwick club- we toured Maeshowe in the morning, a Neolithic tomb complete with Viking graffiti. In the afternoon Steven took us on the sea to go fishing! Saturday morning I bid a farewell to Phil and Katie and spent my last full day on Orkney with members from all over the district at a fun and games day. Sunday I headed to the airport to start my journey in Northern Ireland.

Overall I had an absolutely amazing month in Scotland and I hope to be back soon. SAYFC is a great organization with amazing people in it!

Victoria Kyle is a University of Guelph Junior Farmer. You can follow her adventures at @victoriakyle131.