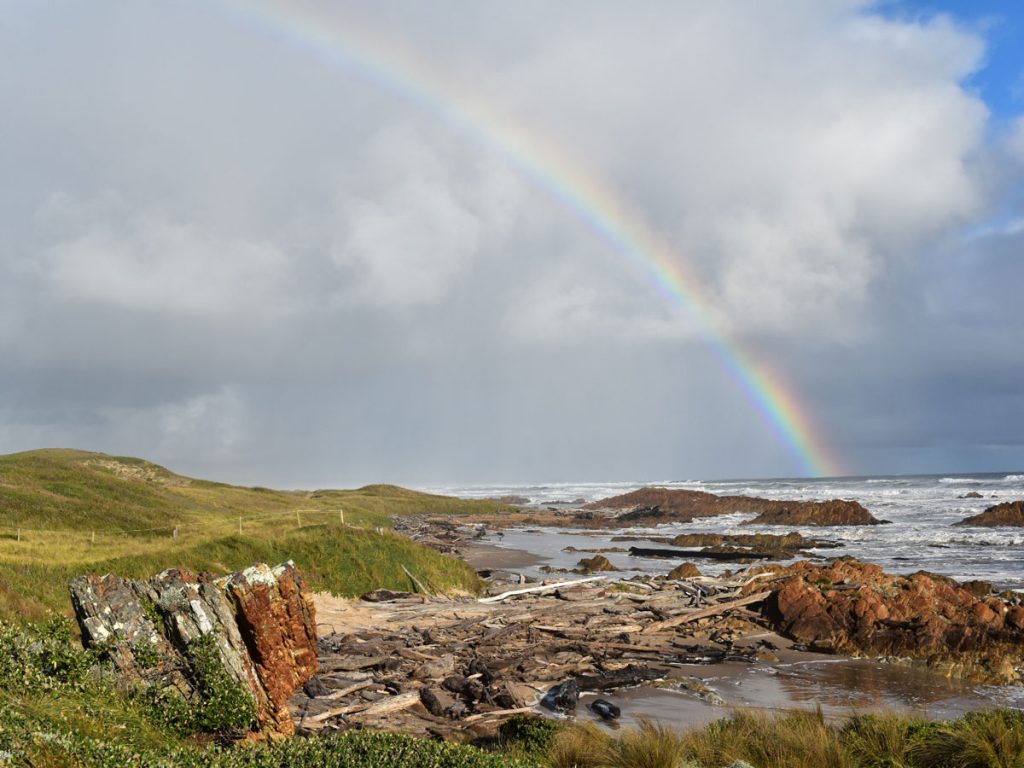 My seventh week started in a very different way than most of my weeks so far. I was staying another week at the Balyes family farm. I was put to work helping with the morning feeding and chores, which hasn’t happened much in my exchange yet. The feeding took a bit of time to accomplish, as the farm is split along the length of the road and the various pens were opposite from each other. The remainder of the day was then spent delivering a semi load of hay to a dairy farm at the mouth of the Derwent river. From there we did a quick run down to the coast and saw Beauty Point and the Beacons Field mine.

My next day was quite likely the earliest start I’ve had on my exchange to this point. I was up at 5 am to meet up with a cattle truck driver at the large feedlot near Powranna. From there we set off to the east coast and the town of St. Helens. The trip took us through the spectacular road way, winding down the St. Mary’s pass. We then loaded two trailer loads of Angus cattle into the back of the truck and set off back to the cattle yards. Once back at the yards, it was mid morning and I was able to get a tour of the 9,000 head Angus only yard. Once that was done, we hooked the train portion back to the truck making it a tandem unit and then we set off to the opposite end of the state and took a load of finished cattle to the processor in Smithton (3hrs away). It made for a very long but very worthwhile day.

Wednesday was spent at a place I hadn’t spent much time at before now and that was on the Northern coast in the town of Devonport. After a visit of the town I spent the afternoon touring and helping at a Kelp processor. There they collect bull Kelp that washes ashore on the West coast of Tasmania. First they dry it in the sun and then in an oven.
Next they grind the dried kelp into a powder. From there the kelp is either bagged as a dry product or stewed and made into a liquid feed additive for animals or a fertilizer for plants. The next stop from there that day was back down the highway to Westbury where the Tasmanian plowing association was having their annual general meeting. Little did I know I would end up chairing the meeting and running the elections, luckily my years of Junior Farmer’s meetings had helped me prepare for this.

Thursday was once again spent on the road, but this time was a different operation and sector. I was to spend the day with an equipment delivery company. Our day started in Dressy with three trailers tied to the back, and we set off to Bridgewater to drop them at the Mannheim auction yard.
There we set off to the West past new Norfolk to a hydro electric dam to pickup an elevated work platform and once we had the platform, we set off through the highlands to Burnie to drop off the platform. All in all it was another long day with some amazing countryside seen.

The Friday dawned very foggy once again but that didn’t stop our trek.
After picking up George from his host near Cressy we set off up to the Northwest coast. We travelled with a feed additive salesman and because of that, we got to see some farms we normally wouldn’t have seen. Our first stop was at the local Roberts (Farm Supply Store for the non
tassies) Store in Smithtown and from there we went on to the farmlands on the Northwest side of Tasmania. Our first stop was to the largest milking heard of Australian red cows in Tasmania. And it was pretty neat to see, as they are descended from several breeds that are common in Canada. The next stop from there was to a black Angus stud farm very close to the coast. Once there we carried on the see the Western most point in Tasmania at Arthur river and we all were treated with a spectacular view of the sea with a rainbow. Next stop on our trek back to the south was through the massive farm complex at Woolnorth where they have grouped several dairy and beef farms under one banner and title for a total of animals in the 10s of thousands range.

Saturday was spent on the farm helping with several jobs such as, making a charcoal dryer, improving the heading system and helping move several different mobs of cattle and sheep to new paddocks on the property. Its definitely a different mindset than back home, when moving animals along the road to the paddocks.

Is is sad to think that my exchange time is coming to a close, but stay tuned for my final week in Tasmania.