This summer, JFAO held its first online charity auction to raise money for this year’s provincial charity, The Do More Ag Foundation. The auction was run by Middlesex JF member Will Johnson and his business, W.J. Auctions. Clubs were asked to donate 3 lots to be auctioned off. We had a great variety of items including baked goods, gift certificates, baskets of local products, personalized butter tarts, and customized products made by our members. The top lot was a set of customized cornhole boards. The auction opened for bidding on June 27 and closed July 8. Once the auction had closed, many members helped pick up and drop off the donations. It was a successful auction with $2330 raised. Thank you to W.J. Auctions for hosting the auction and donating their services to JFAO. Thank you to everyone who supported the auction and helped move the items around the province to where they needed to go

Durham West is continuing to be very busy! All our members are looking forward to the re-opening of the province, which means more opportunities for our club! We continue to have virtual meetings, and planning is under way for hopeful summertime socials. Our Can/Bottle/Battery drive has happened, and we will have totals shortly. Durham West wishes to thank everyone in the community who donated cans, bottles, and batteries, this fundraiser is always quite successful, and Durham West looks forward to many more like these. Our roadside clean up is planned for June 19th at 11am. Last year we covered a road within the Township of Scugog and we were quite successful with five bags of garbage, two bags of beer cans, and two tires. Members of the club are looking forward to this project/social. Durham West wishes everyone a safe and happy summer, and hopefully we will all be able to visit again soon! Stay tuned to the Durham West Junior Farmers Facebook page and Instagram page for updates on our club! By: Meghan McLeod

With the start of a new year, comes the promise of new beginnings and opportunities. However, with the start of 2021 came more lockdowns and restrictions for everyone throughout the province. In hopes of lifting everyone’s spirits, the Middlesex Junior Farmers launched an exciting new campaign, the Mental Health ‘Moovement’. During the month of April, our members challenged other Junior Farmer members, friends, family and alumni to ‘Lift their Moods’ through a lifting challenge. There is a correlation between mental health and physical health, and doing exercise can improve one’s mood. Once challenged, people were asked to do 10 lifting reps with any object that they could find. Everyone had fun being creative with their challenge as many were seen lifting pets, kids, tires, ladders and many other interesting household items. Check out #MentalHealthMoovement and #MiddlesexJF to see everyone’s submissions! The Middlesex Junior Farmers have more exciting initiatives coming soon, so stay tuned to learn more! By Katelyn O’Neil

Saturday May 29th was a beautiful sunny day for North Simcoe’s annual road clean-up. We had a great turn out with 13 members in attendance. We were able to collect 2 truckloads of garbage, including over 200 beer/ liquor cans on our small 5km stretch of adopted road. Special shout out to our President Alex Spence for his great “Dad” outfit. By Adrianna McGinnis

For the past 3 years, pretty pink flamingos have travelled the lawns of Stormont, Glengarry and surrounding areas. On their journey around the countryside they raise funds for a graduating high school student. The Stormont-Glengarry Junior Farmers call these colourful birds the Flamingo project. With the funds raised we are proud to offer a bursary to a graduate that embraces the JFAO motto “Self Help and Community Betterment” and; our Mission as Junior Farmers “to build future rural leaders through self-help and community betterment.” This project brings joy and laughter during hard times to the people that get “flocked” and financial support to a hard working graduate. By: Courtney Courville

On Monday, May 24 our Pigs found their way out of the barn and onto the lawn of a few farmers in Huron and Perth County. They have been making their way around again and visiting lots of different farms on the way. Many people have been loving them and enjoying sending them off to neighbors, friends and family. The pigs went over so well last year that the club decided it would be a great idea to do it again this time a little sooner when everyone is a little bit more available to help with the moving of them. We have decided that we are wanting to donate to the Food Bank again this year and any other money we are hoping to send to mental health initiatives in the area. The pigs will be moving over the course of the month or so until they make it back home but until then keep your eyes open in Huron and Perth for the pigs and where they have decided to sit for the month.

Grey County JF is very excited to tell you about Grey’s Ag Adventure that is running from July 17th – August 28th, 2021! This is a county wide agricultural based scavenger hunt. Travel around our beautiful county to find the information signs about many different crops and different types of animal productions within Grey’s borders. Don’t miss out on the local treats that we have along the way or your chance to win some awesome prizes for participating! Everyone is welcome and we look forward to seeing your pictures on social media! Download your passport to stamp and find the map for hunt at the following links. 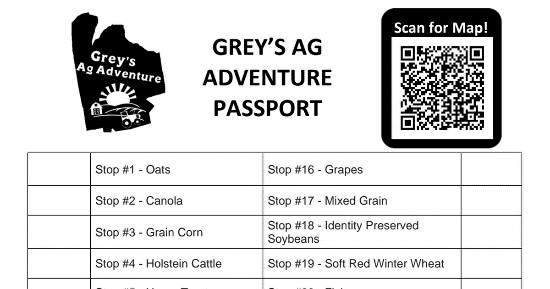 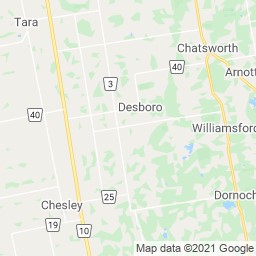 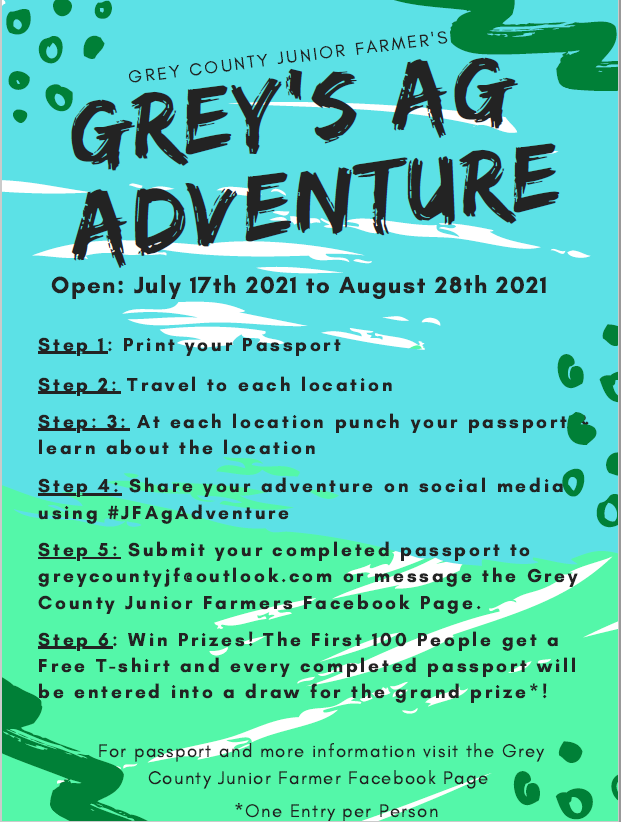 March Conference looked different this year for the Junior Farmer Association of Ontario (JFAO) as they switched to a virtual format with the theme of “A Hoot and A Half from Home”. With workshops, speakers and the banquet being held using Zoom, the focused remained on networking with members from across the province, sharing ideas with other clubs, learning about a variety of topics and of course, fun.

March Conference is designed to bring members from throughout the province to gather for a great weekend of leadership, networking and to recognize those who have shown outstanding community betterment. JFAO had two socials including a line dancing night and one where they learned how to make balloon animals.

The Saturday was full of activity with the keynote speaker starting the day off talking about how to recognize volunteer burnout and strategies to ensure that members of the various clubs feel supported in their roles. Following this was a club roundtable where members were split into breakout rooms to discuss topics like club socials, successful fundraising projects and new member recruitment ideas. In another session, JFAO members learned about local food and direct farm sales during COVID-19 from representatives from OFA and OMAFRA. The afternoon concluded with an exciting cooking workshop where members tuned in from their kitchens to follow along and make delicious bread in a bag and hot chocolate bombs. Their annual awards banquet was held in the evening where members brought their own supper to eat in breakout rooms while socializing.

Awards were presented for different milestones, our new board of directors was inducted with a candlelight ceremony and we enjoyed entertainment from comedian Jeff Estrela. The club of the year award was presented to North Simcoe Junior Farmers.  The Agriculture club of the year went to Huron Perth Junior Farmers.  The Rose Awards were given to an outstanding Novice JF member; Arin Douglas from Wellington JF, an outstanding JF member; a pair of ladies from Huron Perth, Lauren Bos & Jolande Oudshoorn, and an outstanding retiring member, Quintina Cuddihy.  Our communication awards were also presented during the banquet.  The winner of Best Social Media Post was Stormont – Glengarry.  Winner of multiple categories including: News Article Competition, Best New Member Recruitment, Best Community Betterment Club Photo, Best Century Farm Sign Photo, Best New Fundraising Idea was Huron Perth.  Winner of the Best Pandemic Club Social was Renfrew.

Congratulations to all the winners and we look forward to the year ahead. March Conference marks the end of one Junior Farmer year and starts off the next year. With this, our 2020 President Elizabeth Bruce, from Oxford County, passed off the Presidential duties to the 78th President Kylie O’Neil of Middlesex County.

Ontario Young Farmers Forum moves to a virtual program for 2020

[Guleph, Ontario] – The Junior Farmer’s Association of Ontario (JFAO) is excited to announce the session topics for the 2020 Ontario Young Farmers Forum (OYFF). The annual event will be held as a virtual event in 2020 and will consist of four sessions held during the month of November.

“Our committee has put together a well-rounded schedule that will offer something for everyone,” said Elizabeth Bruce, president of JFAO. “The individual sessions have been structured to provide attendees the opportunity to learn about an important industry topic, hear from an innovative Canadian farmer, and network with other attendees.”

The virtual program for the Ontario Young Farmers Forum will consist of a four-part speaker series during the month of November. A number of topics will be covered in these sessions and the final session with include a panel of young farmers from across Canada. Program dates are listed below:

Each session of the OYFF program will also put a spotlight on a different Canadian farm. Here are the Canadian farmers who will be profiled throughout the program.

2020 will mark the 22nd year of OYFF and JFAO is excited to present an engaging and accessible program for all attendees. The virtual program will provide the opportunity for young people working in agriculture to learn, connect, and network with other members of the agriculture industry from across Ontario. Learn more and register for the program here.

Once again, the Perth and Huron Junior Farmers clubs pulled off the petting zoo at the Blyth Threshers. This event ran from September 7-9 in Blyth Ontario